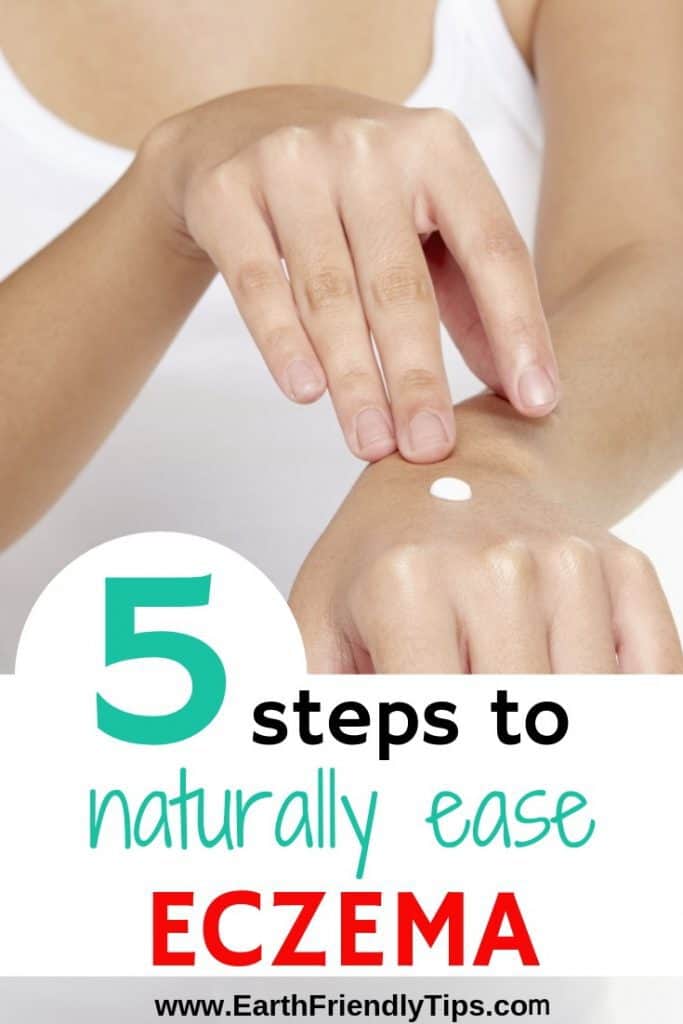 Feel free to share
For your convenience, this post might contain affiliate links. If you shop using these links, I might make a small commission at no additional cost to you. The full disclosure isn't nearly as interesting as these eco-friendly tips, but you can read it here.

How to Naturally Ease Eczema

Eczema is a skin condition that causes a red, itchy rash that usually appears on the face, inside the elbows, and behind the knees. If you or someone you love suffers from this condition, learn more about the steps you can take to naturally ease eczema.

How We Naturally Eased Our Son’s Eczema

When our son was born, he had several health issues. But the one that took me by surprise was his eczema. It suddenly showed up on his elbows, knees, and cheeks when he was about 4 months old.

At first, I thought his skin was just irritated by something, so I tried to put more lotion on. But that didn’t help. I took him to see his pediatrician and found out it was eczema.

At that time, my son’s pediatrician gave me some tips to try, and told me that using a steroid cream to control the rash was also an option. But I wasn’t too thrilled about using a steroid on a 4-month-old baby.

So that’s when I went home and started to do my own research. I was eventually able to put together a plan for my son that ultimately helped us naturally ease his eczema.

One important thing I learned about eczema is that everyone’s skin responds differently. While you might find that you need to follow every step of this process, you might also discover that you can leave some aspects out.

The following are the five steps we used to help our son. I encourage you to take your time trying each step to find the combination that can naturally ease your eczema.

If there’s one thing that I think made the biggest difference with my son’s eczema, it was giving him children’s DHA. DHA is an omega-3 fatty acid that’s not only essential for brain growth and development but also useful in reducing inflammation, and eczema is essentially inflammation of the skin.

In fact, a study done by Dr. Eileen Birch found that infants who received a dose of DHA in their formula had lower rates of allergies, asthma, and eczema. Another study done on adults suffering from eczema also showed that DHA seemed to have a beneficial impact.

Since my son was still an infant when his eczema flared up, I started him out with this baby’s DHA. Within just a few weeks, we began to notice less redness and itching with his eczema.

After his first birthday, I switched him over to this children’s DHA. To this day, he still takes a dose of this DHA, and his eczema hasn’t flared up since it first showed up when he was a baby.

If you’re an adult and looking for a DHA supplement to try, the same company that makes the children’s DHA my son takes also makes a soft gel pill that you can take.

My son’s pediatrician was actually the first person who recommended that I cut down on the number of baths my son got during the week.

I was bathing him every evening, but his pediatrician pointed out that babies actually don’t get that dirty. It’s only after they learn how to walk that they begin to get dirty and need daily baths.

The problem with bathing is that the water doesn’t just take away dirt and grime. It also strips all of the good oils off of our skin. Our skin needs those oils to fight back against eczema.

I ultimately cut down to bathing my son twice a week when he was a baby. I only increased to daily baths after his eczema was under control.

If you’re an adult looking to naturally ease your eczema, bathing twice a week likely isn’t an option for you. However, you can still take steps to make sure your showers aren’t doing more harm than good.

When you shower, lukewarm water is much better for your skin than water that’s too hot or too cold. Also, try to take your showers as quickly as possible.

Another thing my son’s pediatrician mentioned was that we shouldn’t use any products that contain fragrance on our son. This includes soaps, shampoos, lotions, and laundry detergents. Almost all products use some type of alcohol in their fragrance, and alcohol majorly dries out skin.

Since pretty much every soap and lotion in our home had the word “fragrance” as one of the first few ingredients, I knew we needed to start fresh.

I ended up making a fragrance-free homemade oatmeal soap to use as his shampoo and body wash so I could be sure he was getting cleaned with something pure and natural.

I also switched to using soap nuts instead of laundry detergent. If you’re looking for a way to wash clothes without added fragrances, learn more about how you can do laundry with soap nuts. You can even make a homemade liquid soap nut laundry detergent.

Soap nuts are natural products that are great for eczema-irritated skin. As an added bonus, they also naturally soften your clothes, so you can toss out your fragranced and potentially toxic fabric softener as well.

After you take a bath or shower, you want to use a towel to pat your skin dry instead of rubbing it. Although it seems like a little switch like this couldn’t make that much of a difference, rubbing your skin with a towel is harsh and irritating.

Plus, not only is patting skin dry gentler, but it also helps keep some of that essential moisture on the skin.

While I mentioned earlier that I felt like the DHA supplement had the biggest impact on my son’s eczema, I also think finding the exact combination of lotions also played a major role.

I can’t even begin to tell you how many lotions I tested before I finally found the two that helped his skin.

Keeping skin moisturized with lotion is incredibly important when dealing with eczema. We followed a two-step process for making sure our son’s skin stay moisturized.

First, we used this Aquaphor healing ointment directly on the worst spots. For my son, this was inside his elbows, behind his knees, and on his cheeks.

The cocoa butter lotion actually worked so well to hydrate his skin that my husband, myself, and even my mom have all switched to using it as a daily lotion.

Another important step in the process was that we applied both lotions the very second he got out of the bath. It’s so critical to lock in as much moisture as possible.

The saying that I keep in my head is: If it’s been two minutes, it’s too late. In other words, you don’t want to let more than two minutes pass between the time you get out of the bath or shower and the time you put on lotion.

It was so hard for me to see my son’s skin red and irritated from his eczema. That’s why I was determined to find a way to naturally ease eczema without having to use steroids.

By following these five steps, we were able to naturally ease his eczema, and he hasn’t had a flare up since. It’s my hope that you can work with your doctor to incorporate some of these natural options into your treatment plan and get some relief as well.

Now that you have some ideas on how to naturally ease eczema, are you interested in getting even more great tips on how to live an eco-friendly life? Then be sure to check out a few of our other popular posts:

The information in this post is intended for general understanding and entertainment only and is not intended to be used for medical diagnosis or treatment. Always seek the advice of your physician or other qualified health provider with any questions you may have regarding a medical condition.

Earth Friendly Tips is a participant in the Amazon Services LLC Associates Program. As an Amazon Associate I earn from qualifying purchases.

By continuing to use the site, you agree to the use of cookies. more information