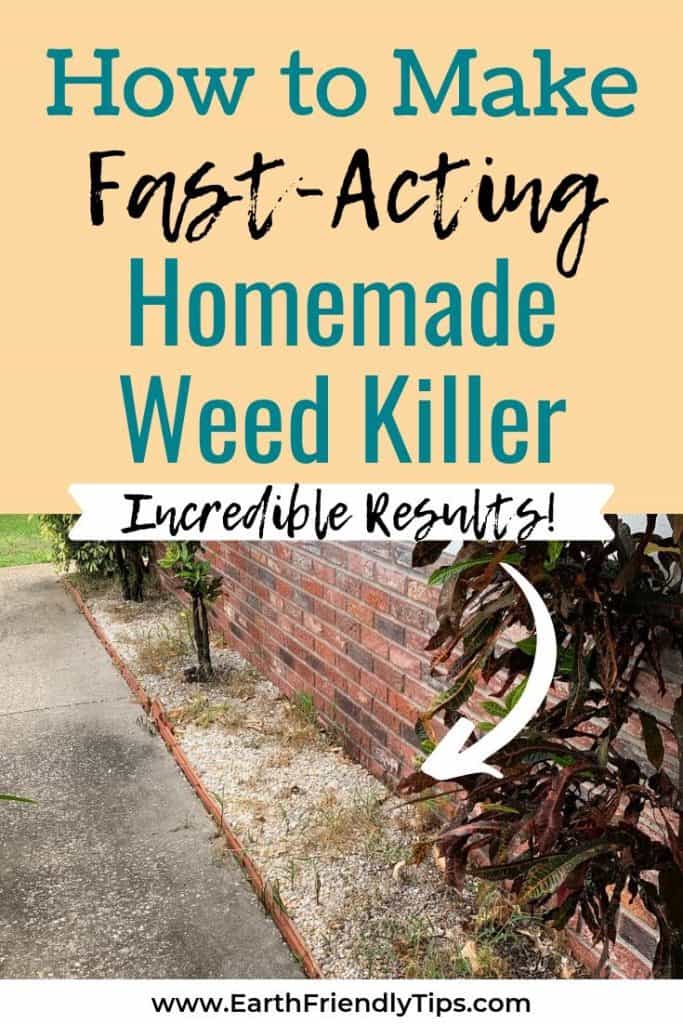 Feel free to share
For your convenience, this post might contain affiliate links. If you shop using these links, I might make a small commission at no additional cost to you. The full disclosure isn't nearly as interesting as these eco-friendly tips, but you can read it here. As an Amazon Associate I earn from qualifying purchases.

How to Make Homemade Weed Killer

If you’re looking to keep your sidewalks and garden area clear of weeds without having to turn to toxic chemicals, discover how to make this homemade weed killer.

It only requires a few simple ingredients, and it can banish those weeds without any difficult work on your part.

Why You Should Make Natural Weed Killer

I’m not too thrilled about spraying any type of chemical where my son plays, and certainly not one that has accusations of cancer flying around. Of course, I also REALLY don’t like weeding.

I’ll gladly do 10 loads of laundry, empty the dishwasher, clean the bathrooms, dust the house, and clean the floors before I’ll even think about weeding.

Related: How to Have an Eco-Friendly Cookout

But what if you don’t have time to DIY? That’s not a problem! Simply check out these best organic weed killers that are ready to use right from the bottle and are safe for people, pets, and the planet.

How to Make Homemade Weed Killer

So let’s take a look at this homemade weed killer in action. Here is a small area beside my house where weeds just love to pop up.

Yeah. I wasn’t lying when I said I really, REALLY don’t like to weed. So I sprayed the weed killer on in the morning, and allowed it to do its thing. Let’s see what happened.

Take a look at that! This is actually after only a few hours. As you can see, the weeds are already starting to die without me having to use any toxic or dangerous chemicals.

When these three ingredients combine, they make a powerful and natural weed killer that draws moisture from the weed and causes it to die.

However, it’s important to keep in mind that this weed killer can’t tell the difference between a weed and a good plant. Therefore, when you’re spraying the weed killer, make sure you don’t accidentally spray anything you want to keep, such as these fast-growing vegetable plants for a quick harvest.

Now that you see how easy it is to swap out toxic weed killers for a natural weed killer, are you interested in even more eco-friendly tips? Then be sure to check out a few of our other popular posts:

By continuing to use the site, you agree to the use of cookies. more information